During my masters I was trained as a vertebrate ecologist with particular interest in the ecology of Neotropical poison frogs (Dendrobatoidae). Apart from their bright colours that advertise toxicity, the frogs have a wide range of reproductive strategies in which one or both parents provide elaborate care to their offspring. I studied plasticity in parental care of these colourful frogs in French Guyana and Ecuador. 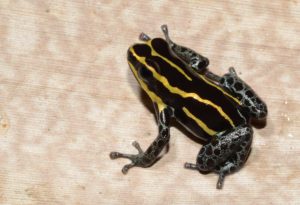 Males of the tiny Amazon poison frog, Ranitomeya amazonica, defend territories of some twenty square meters on the forest floor of the Amazon rainforest. They spent most of their time in and around water holding plants such as bromeliads. Not for nothing, here they perform their elaborate courtship dance to persuade females to deposit eggs in the small water bodies in the leaf axils of the bromeliads. They are good fathers by guarding the eggs against intruders and carrying the hatched tadpoles on their back to other water bodies that they carefully inspect for the presence of predators, food and low risk of desiccation. On a rocky outcrop or Inselberg in the Nouragues nature reserve of French Guyana, I studied the reproductive strategies of these frogs and discovered that males adjust their strategy to seasonal conditions. 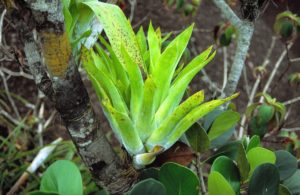 During the rainy season, males establish season long territories in the small patches of forest that are scattered over the granite rock. I could follow each individual in its space use patterns by its unique pattern of yellow lines on its back and by making visual observations of its behaviour and whereabouts. The shrubs are full of terrestrial and epiphytic bromeliads that the males use for offspring rearing. Upon encounter of a female, the males vocalize and encourage her to visit several bromeliads to choose a suitable site to lay her small clutch of not more than six eggs. Typically, eggs are laid in leaf axils with the smallest water volume, just enough to keep the eggs moist. These water bodies are free of predators and cannibalistic tadpoles. They are nearly always in the center of the males territory, predicting that this allows males to keep a close eye on their offspring. 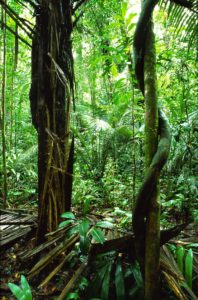 When the eggs hatch, the male comes to collect the tadpoles one or two at the time for transport to other water bodies. Tadpoles are released in water bodies that contain a large volume of water, sufficient detritus and algal growth as a food source for tadpoles and most importantly are free of enemies and competitors. Males avoid pools that are occupied by other older tadpoles as these readily cannibalize on the young tadpoles. However when the rainy season comes to an end, the males more frequently dump young tadpoles and eggs in water bodies that contain large tadpoles. By experimentally increasing or decreasing the availability of pools, I could prove that this behaviour is not due to a limitation in good quality pools at the end of the rainy season. Males seem to sacrifice offspring as high nutritive food to cannibalistic larvae, to speed up the development of older offspring that would run the risk of not reaching metamorphosis before their pool dries out by lack of rainfall. Intriguingly, males adapt their parental care strategies to weather conditions. Individual males also play cunning strategies in which they deposit their tadpoles in pools used for egg deposition by neighbouring pairs. The tadpoles are then provided by a lunch box of unrelated eggs and pirate on reproductive resources of other breeding pairs. 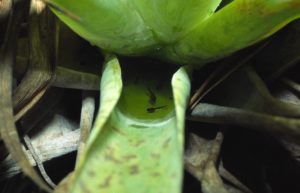 Closely related poison frog species have been found to have similar strategies. By recognizing their own offspring, males can secure that they sacrifice offspring as food for kin and avoid wasting eggs or young tadpoles to non-kin. Females may mate predominantly with the same male or even form a true pair bond to have influence over the outcome of male strategies. It seems that abiotic conditions such as the amount of rainfall and size of water bodies used to rear offspring are the driving force of evolution of parental care strategies in poison frogs. The smaller the water bodies used, the more heavily involved females are in parental care by bringing unfertilized eggs as food source for their offspring. In species that use the smallest water bodies, females take over all tasks of their partner and take full care of their offspring, which in turn are obligatorily dependent on the nutritive eggs that their mother provides them with.

Jason Brown, Evan Twomey, Eva and Max Ringler and many others are still doing exciting research on poison frogs, their websites are well worth visiting! 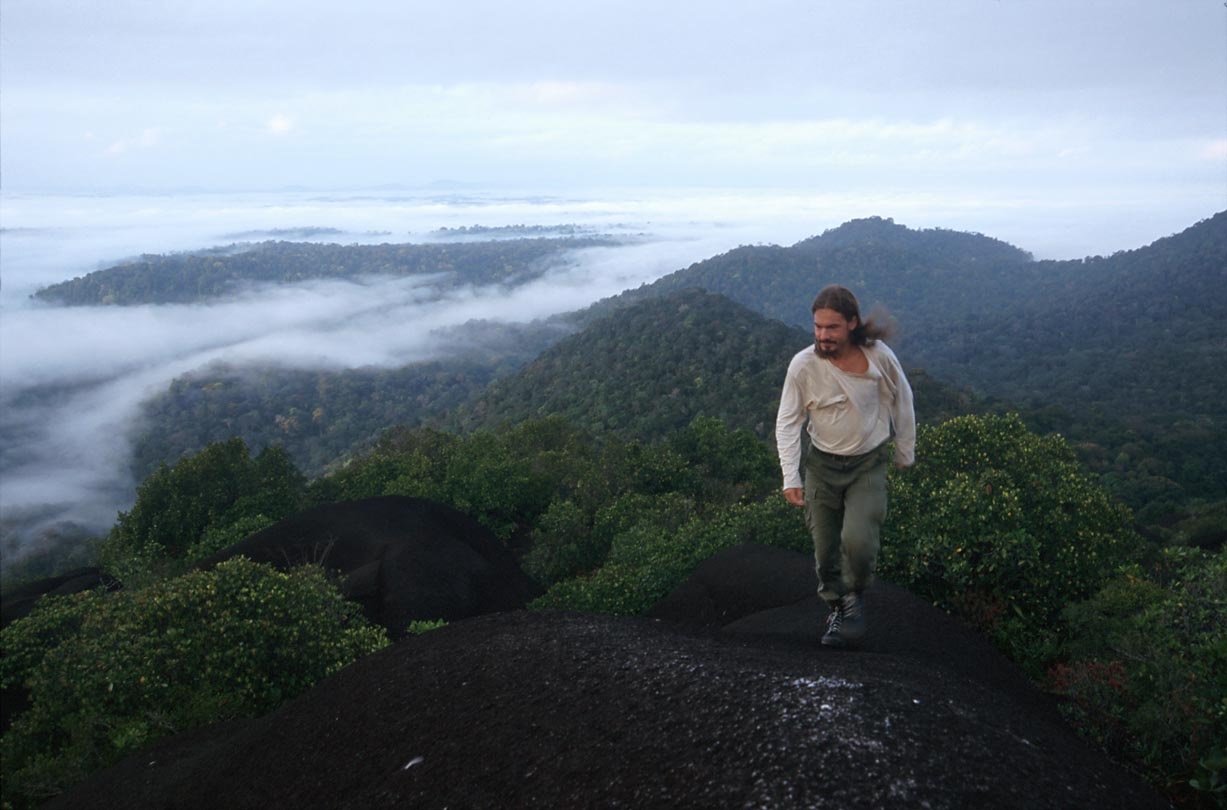 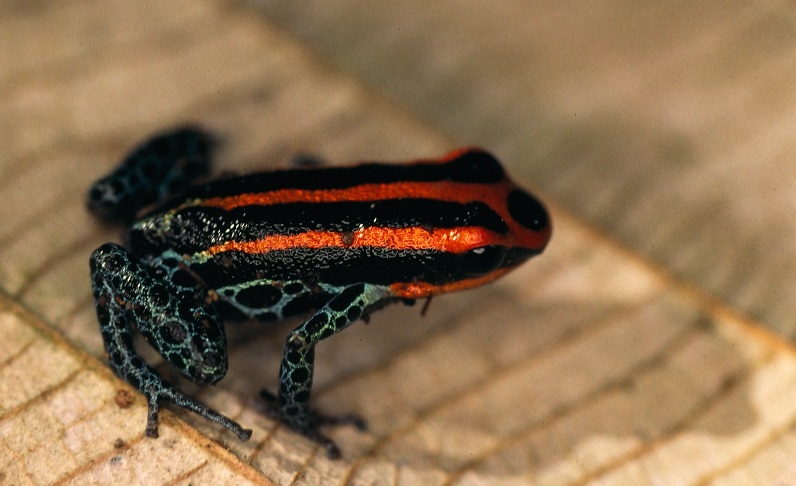 Together with a large team of international scientists, we presented a taxonomic overview of the genus Ranitomeya with description of a few new species and re-description of Ranitomeya ventrimaculata. 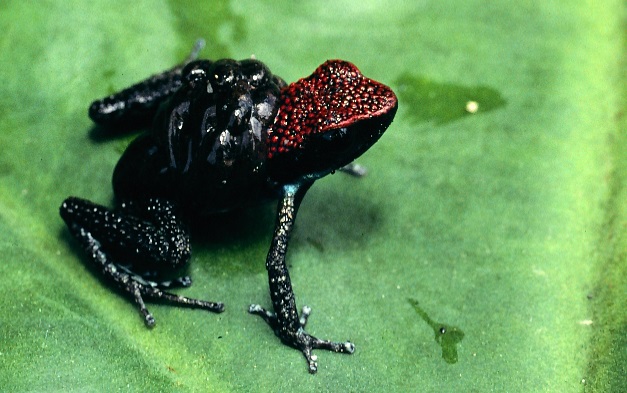 In Ecuador, I studied the red backed Ameerega species Ameerega parvula and Ameerega bilinguis that are known to be involved in a complex system of Batesian and Mullerian mimicri selection with another poison frog Allobates zaparo. I described the tadpoles of the two Ameerega species. 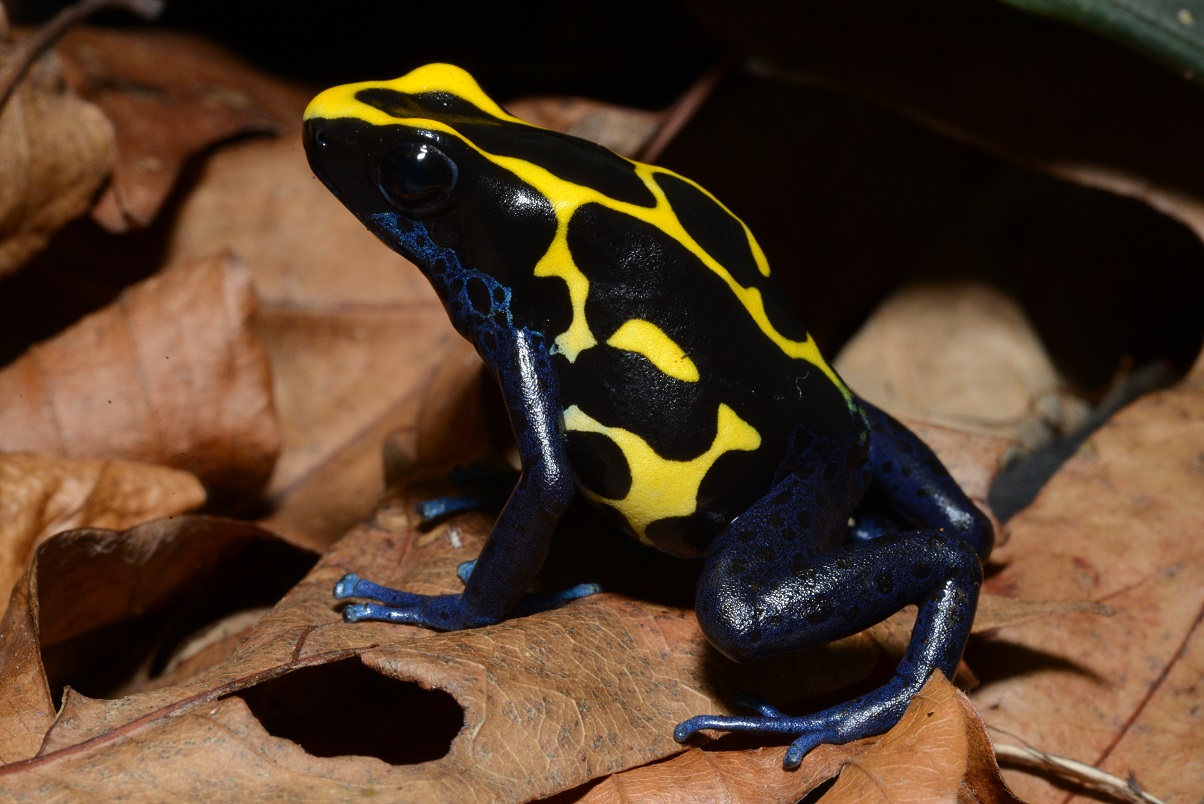 Poison frogs take their poison from the arthropods they eat. This Dyeing poison frog in French Guyana is found to colonize treafall gaps only a few hours after a tree has fallen. It feeds on the diverse arthropods that occur in the canopy and have come down to the forest floor along with the fallen tree. In the dry season the frogs retreat to moist places such as treeholes and have a less diverse diet that mainly consists of termites. Likely toxicity of the frogs diffrs between the rainy and dry season.

After my first visit to French Guyana, I was involved in the re-description of Anomaloglossus beebei and removal of Allobates granti as new species from this species complex.